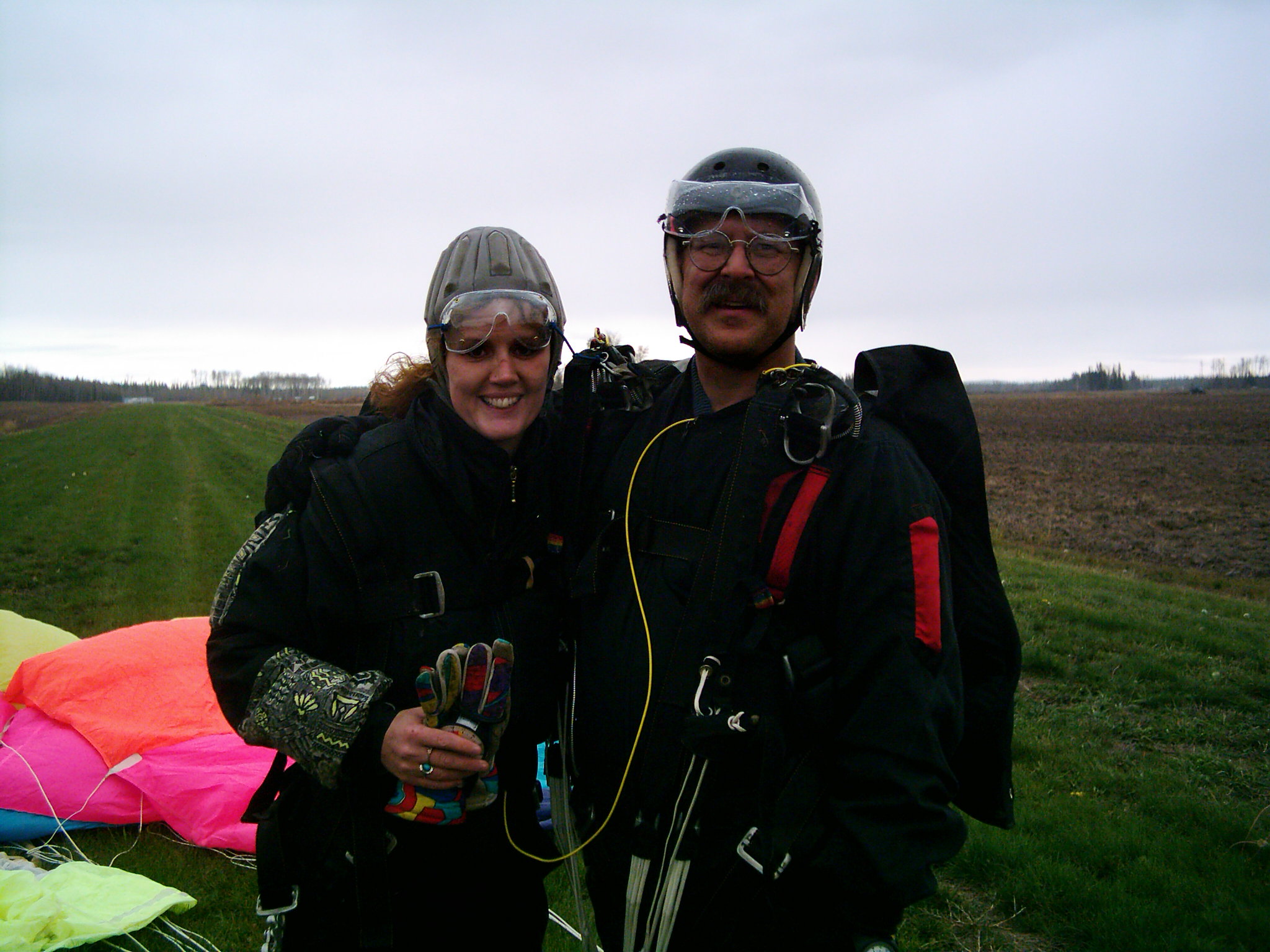 Sometimes I do crazy things just to prove to myself I can do it. I am terrified of heights. So, what is something I can do to face that fear? Jump out of a perfectly good airplane!! I have always had a bit of a fascination with skydiving… just never had the 'guts'. Well, on October 10th, 2004, I faced that one head on!!

I went out on the last jump of the season with Black Ram Parachute instructor Barry, Ben (our pilot), Mike, Byron, and Bob. Okay, I am a chicken first time… it was a tandem jump… not the full solo jump… that is next summer 🙂  We had to chase ahead of a rain cloud so we only went up to 4000 feet, but good enough for a first time!! My impressions? THAT WAS SOOOO KOOL!!!!  It is a very strange feeling to jump out of a plane and 'freefall'. Time seems to stop and I felt like everything was in slow motion. I could look down at the pretty patchwork colors in the fields below while my feet dangled in front of me.

It doesn't even cross your mind that you're actually falling at high speeds!! That is until the ground gets closer…. I think that is when my brain kicked in and came back from holiday!! The whole experience is quite a rush though!

Damages? None!! …okay okay…. a small bruise on my knee… Big Deal!!  I am looking forward to next summer when we'll go up in the sunshine, and probably higher up 🙂 Melissa, Rae-Lee and Jared all watched and now they want to try it!

One last note, when we were packing up on the ground….. I noticed one of the guys wearing a T-shirt that says "Define Normal"…     We all are, of course!

***Update 2005: So far I have not tried skydiving again. Someday I really would like to do it again because it was such an amazing experience. Right now though I am too chicken. Someday… Hey, Great pictures! I'll get you up for a high one next year. ~Barry at Blackram Parachute Schools

Hi Jumping Bean! Leave it to you, to do things like that! I think it is exiting! Come down in one piece and maybe with a new hobby. ~Freya

Hope everything goes well jumping out of a perfectly good airplane! ~Mark P (Thanks to all of you for the love and support ….ha ha ha)